Tobias: “I have a dream of being a first Norwegian, that win Tour de France”

Safe Cycling AS had a chance to sit down with very talented young Norwegian cyclist - Tobias Svendsen Foss. He is only 20 years old and comes from city in Norway called Lillehammer. With his professional approach to cycling and his mindset towards his goals, Tobias has a chance to be one of the best cyclists in Norway and compete against the worlds best riders in the future.

Tobias is very motivated and hard working guy with dream who he is chasing and trying to improve himself every day.

"I think it’s the feeling when you work very hard for goal and really trying to improve and get result, that feeling is the feeling that I am hunting every day."

"I have a dream of being a first Norwegian, that win Tour de France. It’s a huge dream and maybe it’s only a dream, but that`s the thing I have in mind and trying to work to it."

Tour of Norway is a big competition for every young rider. This race is a great opportunity for riders like Tobias, to learn and prove to himself and to others, that he can compete against professional and well known riders. We asked Tobias to share, so far, his biggest moment in his cyclist carrier.

"The biggest, I think is the Tour of Norway last year, when I was first year senior and got the opportunity to race against some big names and that was really nice race for me and I learned a lot. That must be the coolest race I had." 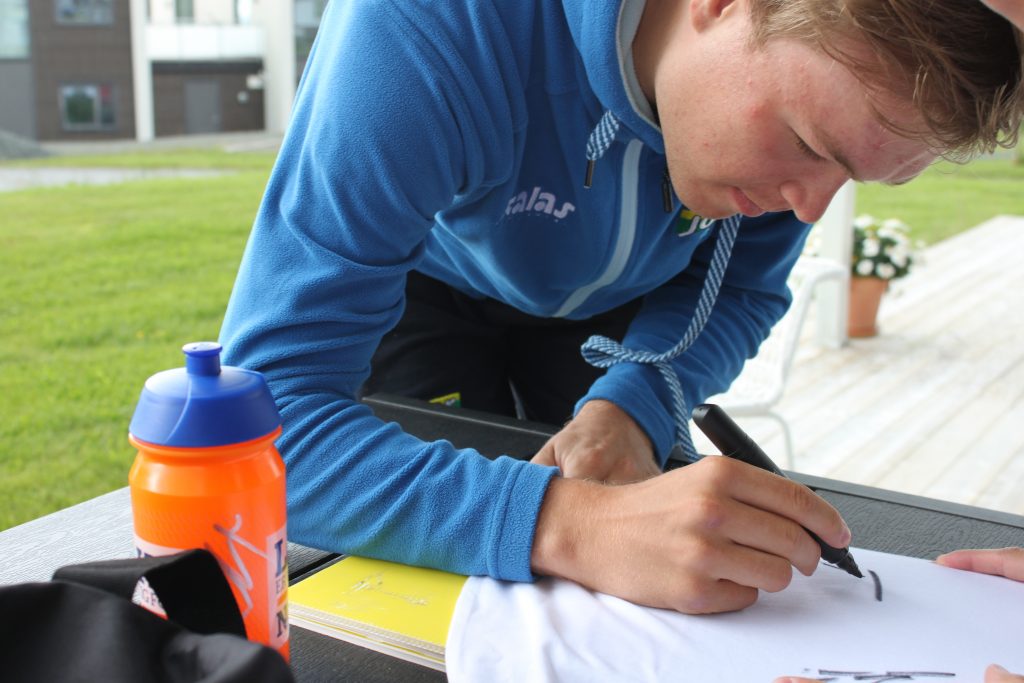 "I thought it was a pretty nice idea, because there is always a lot of obstacles and dangerous points in the course. And it can be tricky to get a man or a person there at all time, so a sign or a just anything would be really nice. Yes, I think it’s going to be easier to be safe on the bike and I think it is important for the safety."

Combination of volunteer and mobile warning sign during the dangerous and tricky parts of the race, for Tobias sounded as a good idea.

"I think, that is the most tricky about safety, obstacles in the road and after corners, roundabouts and the islands. If there was a sign or when the guys standing with the flag and whistle, and it helps a lot. If one guy can be replaced with sign, I think it’s good. And often is, when you come to obstacle like that, it is often a couple of them, it’s not just one island or one roundabout. And if you have one or two signs each, then a lot is covered."