Daniel: “I proved to myself that in a really tough race, I can fight with the best in the world”

Safe Cycling AS had a chance to see Daniel Hoelgaard in action during the Norwegian Road Championships in Trondheim and had an opportunity to meet him personally. In our meeting, we had a chance to hear little bit about himself, last year`s participation in Arctic Race of Norway and his opinion about mobile warning sign usage in cycling races.

Daniel Hoelgaard lives in small city called - Ålgård. City is located in West coast of Norway, nearby Stavanger. He is one of those riders, who is inspired by other riders and always has a drive to be as good as them.

Signing his first professional contract has been one of his biggest moments. Daniel also shared his biggest accomplishment so far in his cycling carrier. “Last year, when I did the Britain`s Classics (World Tour Race), and I was 7th, that was really big moment, because then I proved to myself that in a really tough race I can fight with the best in the world on a good day and that was, like a good approval for myself that you have something to do in this peloton and you are not there just for fun.” 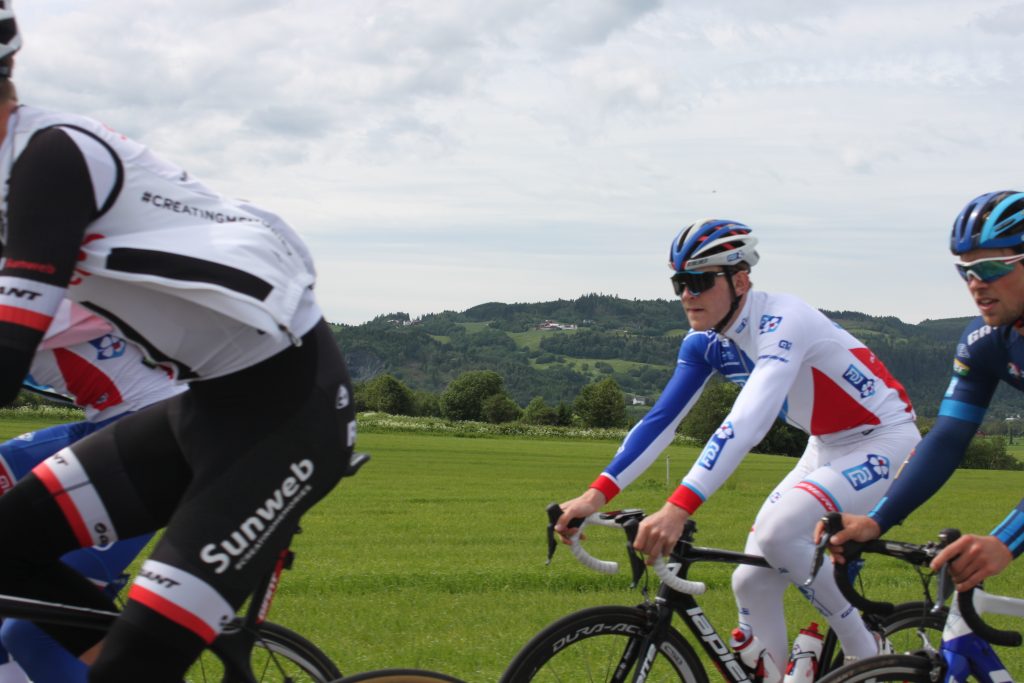 Daniel participated in last year`s Arctic Race of Norway and shared his experience and impressions about the race.

“Arctic Race of Norway was spectacular race with beautiful nature and surroundings. Also the public, the people who lives up there is amazing. Up North, there is always people in the Start and Finish area cheering for us and there is big support for us during the whole course. After the race, riders always talk about it.”

We introduced Daniel to Mobile Warning Sign and his impression was positive. “For me,the first impression looks really good. Like we talked about, that cycling is a sport with traditions, that`s been really stuck with old-school safety net or what ever you can call it. And to have something that reduce motorcycle in the peloton and a new way for protection of the cyclists, could be really helpful.”

“From my perspective, it could be a big improvement. Now, I haven’t seen this new machine or this new thing in use, so I cannot say 100% sure, but there is a lot of times, when there come`s the obstacles, 50 meters more there is the same, but it`s not covered and that could be dangerous. For me, if there is something that lights up this also and make a sound, for sure it will be more safe.”

As well, Daniel mentioned motorcycles as his biggest threat or issue during the races, in terms of safety.

“Of course, they are there for our protection, so when they come, you always respect them and try to let them pass in the peloton. But it also leads to dangerous situations, because the motorcycles have to pass, because they have a job to do and they will protect us. But they can also come in hectic situations when the riders really need to get to the front and then it will be a conflict between motorcycle and the rider. So, for me that is the biggest treat or issue at the moment.”