Carl Fredrik: “I have a dream and I want to make that dream come true”

We had a great chance to meet Carl Fredrik Hagen, 25 years old rider from Oppegård, Akershus, Norway. We set down with Carl Fredrik and got to know him a little better, as well he shared his thoughts about one of the biggest cycling races in Norway - Arctic Race of Norway and his opinion about mobile warning sign.

Carl`s cycling carrier has been very interesting. Not so often you can hear a story, where cyclist at age of 22 is starting to ride with road bike and in three years he is already a professional cyclist. But we have to mention that before he started cycling with road bike, he has been many years in mountain bike races already, where he had won the biggest mountain bike race in Norway -Birkebeinerrittet.

Carl Fredrik was asked, where he see himself as a cyclist in coupe of years. “Hopefully, I will take a step up. Get a stability on a one higher level. Get some good results. I need to get some victories. And I hope, that I can be part of World Tour Team in the future, but I want to just have fun on the bike and take step by step. I am not so stressed to be part of a World Tour Team in one year. I will take my time. I am not racing so many years on the road bike. I am 25 and I am not so young, but I think I will take step by step next years.” 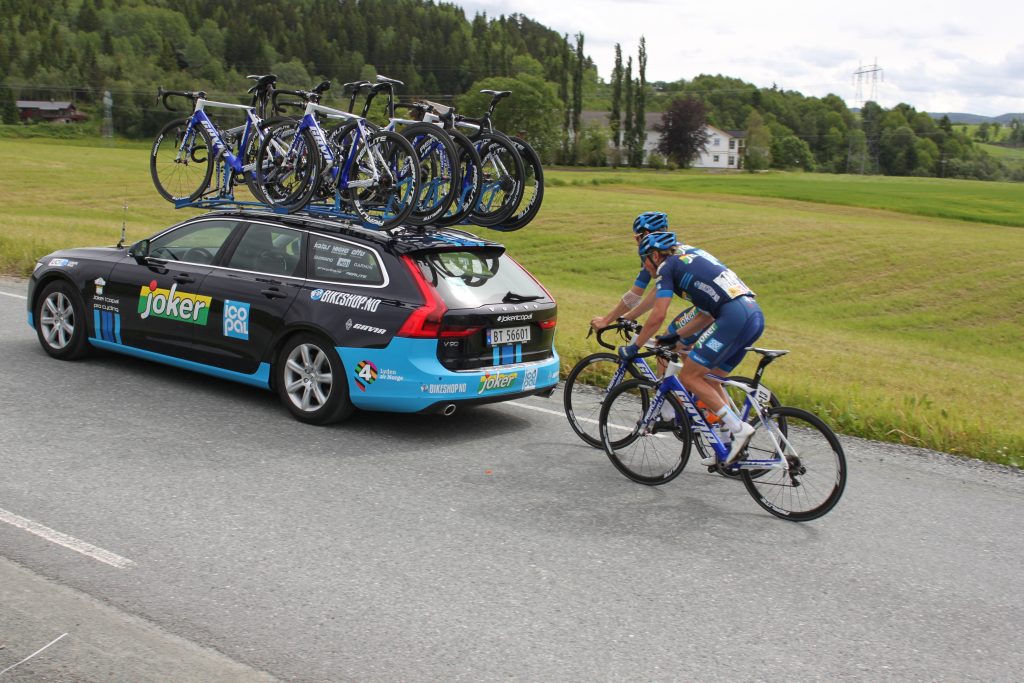 We asked Carl Fredrik about last year’s experiance in Arctic Race of Norway and his thoughts about, how well is organized race. “Everything with Race is so good, I think. It is one of the biggest races we have in Norway. We can feel that it is a good organized race with ASO. And everything is lined up every day and you have good stages. As well, big start list with a lot of World Tour Teams and lot of people in the course. And I think it’s a beautiful race, nature also, of course if it’s a good weather. (Laughs)”

We asked him to share his thoughts and opinion about mobile warning sign. “It sounds like a good idea. It’s a lot of races which are dangerous for riders. Its not so easy to make safe competitions. Its many people and you need a lot of money, a lot of police stuff and other organizers to make it safe. So if you can have the table and sign and you can use sound and LED lights and something. You can maybe make it easier to have a safer race. And that’s good.”

He mentioned motorcyclist importance and at the same time, how they can make the race more dangerous. “It’s good to have a lot of or enough motorcyclists and not too few, so that they don’t have to go up and down during the peloton, through the whole stage. And that’s dangerous. Dangerous part is when the motorcyclists are passing the peloton. So, it’s enough motorcyclists in the front and enough in behind. It’s much safer. And of course, the safest is to have peloton without the motorcyclists. We have seen on every biggest stage races, it is some crashes or something. So that’s not good, but I think we need to have some motorcyclists, because they are for the rider’s safety. But also have enough persons on the islands and on dangerous things. And of course, the warning sign with some sounds and trying to get your idea in life.”

As well, Carl Fredrik Hagen shared his thoughts and opinion on, where we could test our mobile warning sign. “I think it’s a good idea to test it out in big races like Arctic race or Tour of Norway or some other big races. As well, try it in some smaller UCI races too and see if it can make it easier for the organizers and for the riders.”